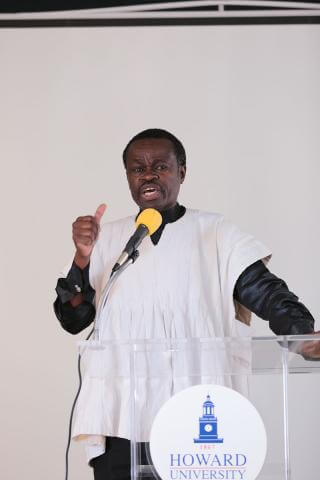 The Palavar Series presented a public lecture on Africa and Black Diasporic Engagements featuring renowned Dr. PLO Lumumba. The event took place from 2:00 to 4:00 pm on Thursday, October 18, 2018, in the Louis Stokes Health Sciences Library at Howard University. The public lecture, “On the Role of Africa and the Black Diaspora in International Affairs” was hosted by Dr. J. Jarpa Dawuni of the Political Science Department and Dr. Msia Kibona Clark of the African Studies Department.

Dr. Mohamed Saliou Camara, Chair of the African Studies department, provided the welcome address. Next, Ayana Gregory, daughter of the late Dick Gregory, gifted the audience with an inspiring and interactive opening song, reminding the audience that, “We are the ones that we have been waiting for for…. We are qualified.” Dr. Dawuni then gave a brief introduction of Dr. Lumumba, the renown Kenyan lawyer, Pan-Africanist and public speaker, calling him “a great son of Kenya, greater son of Africa, and an even greater Pan-Africanist.”

Dr. Lumumba expressed his enthusiasm to speak at Howard University and share his thoughts on a subject that is very important especially on the history of Africa. He discussed the popular but often misguided conversations around the Black diaspora that focuses solely on slavery, colonization, or its independence era. Instead, Lumumba insisted that we should look at how Africa is today and the disbursement of its sons and daughters throughout the world. He stated that Africa is attractive to many players on the global stage, then posed to the audience the question of why. What is it in Africa that people seek? He noted, that Africa is becoming an economic and political mecca and has a bright future ahead. Read the entire article here.